Feel the Light at FEED 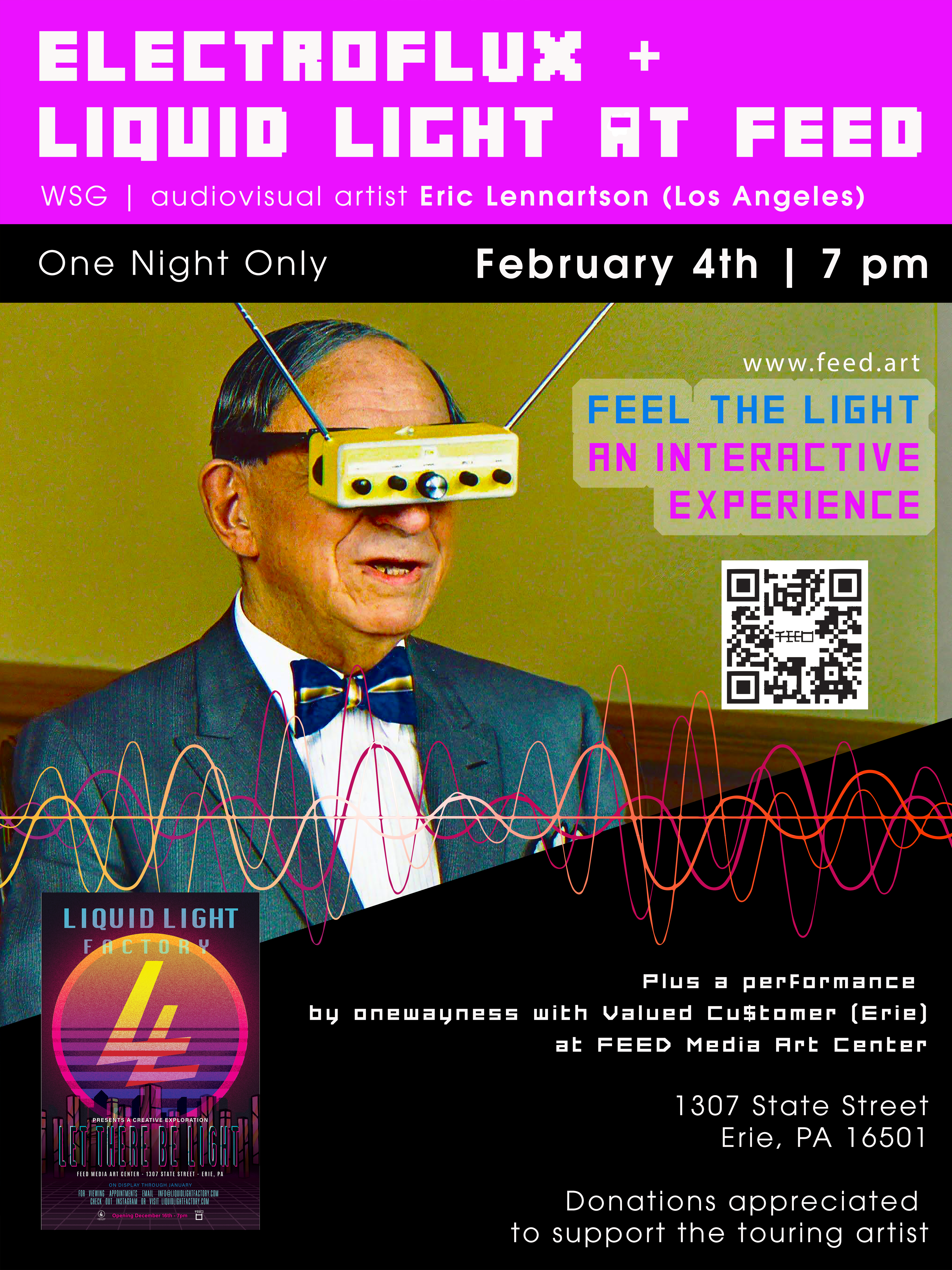 -----
Eric Lennartson is an Oscilloscope Artist, Composer, and Improviser based in Los Angeles. His audio-visual work makes use of analog oscilloscopes, an old piece of electronic testing equipment. While performing, he sends the sounds from his computer directly to the scope and a set of speakers simultaneously. In doing so, sound and image create a feedback loop of meaning. Although sounds create the images, the images have a direct influence on the creation of the sounds. The resulting effect is non objective imagery that interacts with dense noise, pulsating tones, and unstable beats. Through this interaction he explores the intersections between the analog and the digital, as well as the different perspectives and meaning inherent to the sound and image themselves. He has a master’s in Performance and Composition from the California Institute of the Arts and a bachelor’s in Percussion Performance from the University of North Texas. His works have been presented at the Vector Hack Festival in Rijeka Croatia, Music For Your Inbox, and can also be seen as part of an installation at Meow Wolf’s Omega Mart, in Las Vegas.
ericlennartson.com
Liquid Light Factory is an Extended Reality (XR) technology firm that oversees and project manages everything from design to installation of XR public art projects, projection mapping, and virtual production. Co-founders Jessica and Nick Taylor have over a decade of experience owning and operating the Erie-based video production company, Menajerie Studio. Likewise, co-founder Brad Triana has the same amount of experience managing BOTH Studios – a design, fabrication, and manufacturing shop in Erie.
liquidlightfactory.com
onewayness is Adam Holquist, a composer, musician, sound designer, and multimedia creator from Erie, Pennsylvania. He uses guitars, pianos, analog and digital synthesis, spoken word and field recordings, and a variety of hardware and software tools to create atmospheric and textural music which draws influence from a variety of sources. These may include: ambient, drone, minimalism, post-rock, and vintage and contemporary electronic 'listening music'.
onewayness.com

Valued Cu$tomer ran away from Edinboro as a teen and has returned to Erie! Youthful experiments electronics, comix, fire and plastics with McKean’s Bulk Foodveyor inspired the duo to form Lord Knows Compost in homeroom at General McLane High School. The duo has performed live video spectacles in NYC, San Francisco and L.A. Valued Cu$tomer’s first appearance in Erie since the 80s will feature a live remix of PJ Askey’s drone shots of the frozen waves of Lake Erie.
https://www.videohistoryproject.org/live-video-performance-video-lord-knows-compost-bulk-foodveyor-valued-cutomer-77-hz-poool-stackable

Without light, life on Earth would cease to exist. Lighting sets the scene, affects our mood, allows us to see objects and colors. In its most basic form, art is one of the first ways in which humans tried to capture light. This leveled up with the advent of camera technology - projectors as the paintbrush and screens as the canvas.

From both a scientific and spiritual theory, everything that exists comes from light and will return to light. From the formation of the universe governed by the speed of light to the inevitable deaths and rebirths of galaxies and microbiomes, this installation encourages the contemplation of different forms of creation and destruction as a natural cycle.

The series of small towers display different varieties of light patterns and colors that may be interacted with allowing the participant to create their own unique version of the display. This leads to the chevron display. Chevrons indicate movement and the collage of video imagery on each chevron symbolizes a different stage of creation: The Void, Light, Space, Systems, Elements, Beings, Environments. The large tower is a video collage of paint drops, ink blots, fractal patterns, micro-organisms, and cells. Each image symbolizes a beginning of different forms of creation. The soundscape is a mix of different sound effects inspired by the imagery on the chevrons and meditative tones that are associated with DNA repair (528 Hz) and theta waves associated with the sacral chakra which governs creative expression, sexuality, and emotions.

This exhibit is part of the research and development process of a larger, permanent, outdoor installation. A full-scale version of the towers will be part of the new Erie Country Redevelopment Authority’s Ironworks Square development located at the former EMI site on 12th Street in Erie.

Company Description:
Liquid Light Factory is an Extended Reality (XR) technology firm that oversees and project manages everything from design to installation of XR public art projects, projection mapping, and virtual production. Co-founders Jessica and Nick Taylor have over a decade of experience owning and operating the Erie-based video production company, Menajerie Studio. Likewise, co-founder Brad Triana has the same amount of experience managing BOTH Studios – a design, fabrication, and manufacturing shop in Erie.